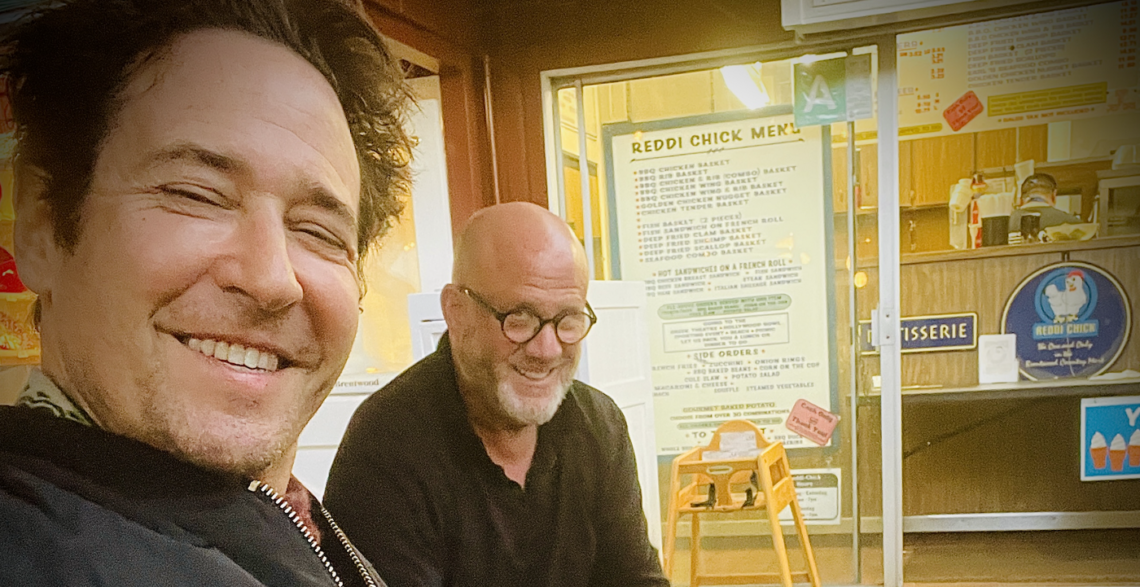 I’m a content junkie. I consume absolutely everything that I find remotely interesting — articles, books, YouTube videos, podcasts, shows, documentaries, whatever — because I feel it’s important to keep learning all the time. Discovering and embedding yourself in new perspectives is a great way to do that. Plus I love to share!

This idea of lifelong learning is one that I try to instill in my interns, especially when it comes to learning and understanding the entertainment business. So I asked them to watch HBO’s docuseries The Last Movie Stars, about Paul Newman and Joanne Woodward, then send me their thoughts.

I enjoyed seeing the throughlines in their notes and the different things they got from the experience. A client, Rob Morrow, and I had been discussing the series and after seeing my interns’ responses, Rob wanted to jot up his own notes.

I loved this exercise — seeing how different generations at different stages of their careers all appreciated the Golden Age of Hollywood, how they conceptualized the work it takes to make it in Tinseltown, how they drew similar meaning from different anecdotes.

Rob is a veteran actor with decades of experience, including the lead on the long-running, beloved show NORTHERN EXPOSURE. My interns are fresh out of college, just beginning the road to their dreams. Different places in life, such similar perspectives. I found it fascinating and a prescient reminder that our similarities always outweigh our differences.

Read on to see their thoughts for yourself.

None of us get through this game of life without challenging obstacles. Ethan Hawke’s mesmerizing, sobering, and ultimately inspiring exploration of the extraordinary — though not without a myriad of troubles — lives of movie stars, Paul Newman and Joanne Woodward, reveals that ultimately we are all a sum of our choices, actions, and reactions.

Newman was an insecure alcoholic, forever dubious of his talents and Joanne wrestled with being in his shadow after initially being the bigger star and folding his kids, from another marriage, into their chaotic lives. Newman lost a son (from 1st marriage) to drugs and alcohol, and Woodward harbored an ambivalence about motherhood. Aside from exploring the multitude of great and less-than-great film, theater, and TV credits they racked up, the tension between their evolution and devolution against the notion of “having it all” is what I found so fascinating.

With all their worldly success and loss, they grew closer and deeper as a couple, the older they got, overcoming infidelities and psychological wounds. They seemed truer to a deeper nature in their later years.

To me, what could be better than to still be “becoming” as one winds down in life?

In his 80s, Newman was dedicatedly going to therapy with one of his daughters to help them work out the baggage she accumulated from being the daughter of a constantly “preoccupied” movie star. Ultimately the Newman/Woodward coupling culminated in the adage, “it is better to give than receive.”

They gave us joy, insight, and diversion in their creative endeavors, but they arguably did the most — for the greater good — through benevolence — through their immensely successful philanthropic and charitable enterprises.

Watching Newman as a kid I metabolized his performances, his stillness, his inner life, his insouciance. He became a part of me. I unconsciously draw on what Newman did as an actor.

Whether anyone else can see it my performances, Newman informs them and watching Ethan’s six-part doc made me want to step up my game of using whatever I have to make life better for others, my family, and those I don’t know.

I completely agree about how inspiring Newman and Woodward’s relationship is.

Even later on in their marriage, their dedication to themselves, each other, and those around them show that age and career should not stand in the way of reaching a greater pursuit to give to the world.

In a time where so many love to idolize celebrities or view them as otherworldly, it is humanizing to show the ups and downs of Newman and Woodward’s lives and how they also struggled despite being Hollywood legends.

As someone who has always been fascinated by the Golden Age of Hollywood and as a theatre minor, I absolutely loved watching this episode of The Last Movie Stars.

Hearing the constant name drops of famous actors who we revere today truly reminds us what a different industry Hollywood was in the mid-1900s, and how Paul Newman and Joanne Woodward were exemplifications of the classic Hollywood star.

I was particularly interested in their different career paths and their approach to acting, especially viewed from the lens of people currently working in the industry. Everyone speaks highly of their talent and grace, even when the style of acting and moviemaking is much different today.

Watching The Last Movie Stars was incredibly interesting to me because, as much as I hate to admit it, I wasn’t entirely sure who Paul Newman and Joanne Woodward were. Two names heard in passing between older family members, it is only at the age of 21 that I am starting to watch and come to a new appreciation for early to mid-20th century films. This documentary offered a new perspective on not only the couple but the state of the industry at the given time.

It feels like only now are we starting to undo the idea of celebrities being perfect idols. Not only is this an unrealistic standard for an audience, but an enormous amount of pressure on the celebrities themselves. The Last Movie Stars finds a way to share this couple’s story in a casual and inviting way, breaking down their celebrity aura and turning them back into everyday people.

As Rob Morrow said, “What could be better than to still be ‘becoming’ as one winds down in life?”

As someone who is entering their last year of college, it is beautiful to think that entering a new stage of life is not necessarily a loss, but an opportunity to become something greater or perhaps even just different.

Through the lives of Paul Newman and Joanne Woodward, one can see just how great life can be in each stage with every up and down.

When I graduate college, I will be sad to leave that life behind, but will also be excited to be given an opportunity to do something new and wonderful, just as Paul Newman and Joanne Woodward did.