Sometimes you Have a Hunch and you Write About It #Preacher - Brian Medavoy
© 2021 Brian Medavoy. All Rights Reserved. Website by D4 Nguyen. 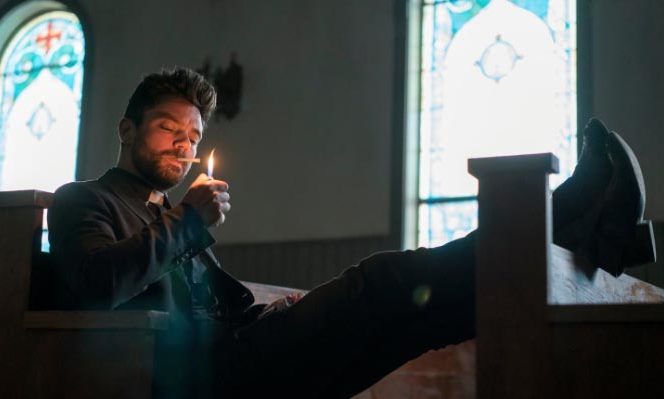 Dominic Cooper asked me a simple question prior to the show being shot: Should he pursue The Preacher?

Let me start off by saying that that was one of the most enjoyable meetings I’ve ever had with anybody in almost 25 years in this business. You’re a class act and a genuinely good person to be around. That kind of energy can be very rare and it was refreshing to have such an earnest, relaxing conversation in a business meeting. I truly appreciate you coming by and was thrilled to find you actually exceed your sterling reputation.

I’m looking forward to seeing MISS YOU ALREADY, and of course I think WARCRAFT will take your already excellent career to new heights. The plays I am less familiar with, but I’ll be investigating them so I can get a better feel of what kind of material inspires you.

In regards to PREACHER: I have since had the chance to read it and it really feels like something special. AMC has arguably the best track record of putting out shows that are both highly rated and awards considered and this one is certainly no slouch. THE WALKING DEAD has proven time and again that AMC knows how to adapt comics into quality mainstream television, and PREACHER is such an episodic, cinematic comic to begin with that there’s every reason to believe they can do it again.

It can be dicey to compare television shows and their source material, but the one thing you can guarantee is that the network that brought you Walter White, Don Draper, and Rick Grimes is going to put one hell of an effort into making Jesse Custer one of the most interesting characters on television. There’s obvious mystery in his past and the preacher gig is about so much more than serving God and his congregation–it’s about getting spiritually and morally right in his own eyes. That battle resonates with people. In the comics, at least, Jesse’s journey yields a large amount of violent poetic justice and deeply probes at what it means to have ownership over your own soul. While in many ways PREACHER is about the supernatural or celestial, there’s a chilling realism in how it portrays our relationships to faith and personal identity. I’d expect the show to follow suit.

I really believe this has a good shot at becoming one of the most complex, challenging, and truly investigative roles you’ve ever played. That’s the magic of television: the stories are so long that you don’t just get to know a character, you start to become them and they you. There are legendary performances throughout the history of film, but in the past ten years alone we’ve seen some iconic, completely unprecedented ones on television. Two of which aired on AMC. This strikes me as a role which can make you evolve as an artist. Yes, it’s a time commitment, but it also allows you to be even more selective with the films you pursue and may push you from tent poles to Oscar contenders.

Ultimately, as with any role, you should love anything that you commit yourself to. That holds even more true for television where the time investment is larger. I think you’d be phenomenal for this project and could do some remarkable things with Jesse Custer, but that’s just one humble opinion from a manager you impressed today. Regardless of your decision, there will be many great roles in your future, and whether or not I am there to help you field them I am genuinely excited to see the remarkable things you accomplish.