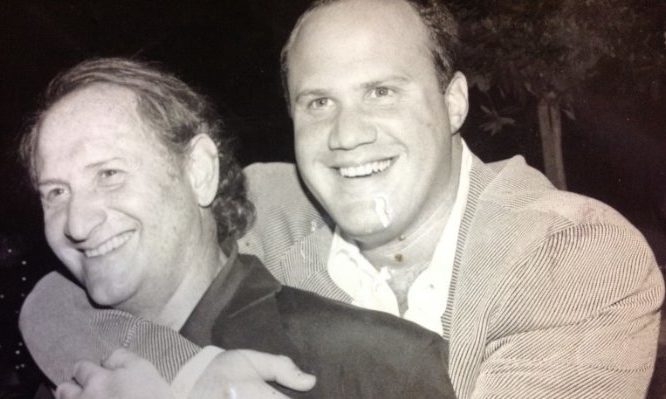 I’ve written a post over at Medium that reflects on Khizr Khan’s speech, his relationship with his fallen son, and my own bond with my father Mike Medavoy.

Khizr Khan’s speech at the 2016 Democratic National Convention was an eye-opening moment. In seven minutes, Mr. Khan delivered a moving tribute to his son Humayun, a slain US Army Captain who was also a Muslim. Much of the discussion among news pundits has been in light of his war of words with Donald Trump. What I think is being overlooked, however, is another theme that ran like an undercurrent through his speech: the relationship between a father and his son. Mr. Khan expressed a loss that cannot be truly understood by anyone but him and Humayun’s mother, Ghazala Khan. It moved me, and inspired me to reflect on the relationship I have with my own father.

I’ve always had a complicated bond with my father Mike. As a legendary Hollywood agent, executive, and producer, our relationship often had to be put on hold. Our home life was rarely stable — I changed high schools over half a dozen times. When I started working in the entertainment industry, my father took the Bill Gates approach to parenting — in other words, I had to make my own way, without assistance or favors from one of the most powerful people in the business.

However, I have to give credit where it’s due. As much as I might have resented his decision, I became stronger for it — a better manager, a better producer. I succeeded because he forced me to. In April of 1999, I was asked to speak at a dinner being held in his honor. I’d like to share the speech that I gave that night, as an example of what my father meant to me then, and what he still means to me:

I’ve been told that I resemble my Dad in lots of ways. I’ve got his eyes, his laugh and — unfortunately — his hairline.

But seriously, like so many sons, I always thought my father was larger than life. In fact, I remember once when I was in junior high I asked Dad to read a book report I wrote. I gave it to him in his study, and when I came back a few minutes later, he looked at me and asked, “Brian, is this the best you can do?”

I took it back, worked really hard to rewrite it, and gave it to him a couple of hours later. A few minutes later, he called to me, asking, “Brian, is this the best you can do?”
Now I’m scared. I pulled my very first all-nighter, working on the report until dawn. I gave it to him over breakfast, totally exhausted, and went up to my room to wash up. When I came back in, he looked up at me and asked: “Is this the best you could do?”

A drive to always be at my best is just one of the many legacies my father left to me. What’s more, I know that my father’s common sense and uncommon values have deeply touched hundreds — if not thousands — of people over the course of his career.

There’s no question my father is an ambitious man, who built his reputation by creating beautiful — and profitable — movies in the face of many challenges. He also enjoys the perks that come with his hard-earned success. But throughout the years, my father has talked to me far more about living a good life, instead of the good life.

In the mid-to-late 1980s, Dad began writing me a series of letters. As always, his timing was excellent. They came at a time when I was struggling with my own ideas of who I was and the mark I wanted to leave on the world. I’d like to read a passage from one of those letters, and let his words speak instead of mine:

“Because of the community we live in, where people and things can be larger than life and reality takes place in that rarefied air at the top, it’s easy to get the wrong idea about what a person should be. We live in a time that puts a tremendous emphasis on material things and instant gratification. But you must never lose sight of what it means to carry real values with you in life.”

‘Real Values.’ It’s a phrase that has been used so much lately that it’s easy for it to lose all meaning. But for my father, “real values” isn’t an abstraction that’s talked about over after-dinner drinks — it’s a detailed road map to leading a good life. If you’ve worked with him, you know that no detail escapes his eye, and that he doesn’t let others interpret his own vision. So he goes on in that same letter to describe — very precisely — what his values are.

“If I teach you nothing else, you are a success in my eyes and in your grandparent’s eyes, if you aspire to be an honorable man, a good person, good for your word, good to others, helpful to those less fortunate than yourself, carving your way through life that is open and above board, honest and respectful, gentlemanly and courteous, taking responsibility for your actions — not trying to blame the next employee or your background and upbringing or anyone other than yourself when you step out of line. Far better that you should learn from your mistakes so you can move on and progress.”

It doesn’t get any simpler — or more right — than that. In a few short phrases, I think he captures the essence of what has made him such a great businessman, a great father and a great person.

What’s more, he’s lived by these principles throughout his life. When he was 17 years old, he wrote a letter to his Uncle Don. I’ve held on to that letter for many years, and I’d like to read you one particular passage:

“I had the chance to be a counselor at one of the YMCA camps. They were counting on me, but I had to turn them down. Why? Well, Dad says since I’m going to college next year, I’ll need to earn some money. I think he needs the money I’m getting, and it’s about time I helped my family out a bit.”

Those are real values, as lived in real life.

I know how proud Dad is to be honored tonight by the Dashew International Center at UCLA. He’s had a love affair with the school that stretches back over 40 years. In fact, in that letter from 1958 he writes:

“Well, I’m sure glad that you are coming to Los Angeles and UCLA. Boy, are we cool cats? We’re going to one of the biggest colleges in the world.”
His experience at UCLA never left him — although fortunately his 50’s ‘hipster’ lingo did! Almost 30 years later, he wrote to me:

“For me, learning something new is perhaps the most important and satisfying aspect of my life. There’s nothing like the old light bulb going off in your head.”

I think it’s safe to say that my father has seen that light more often than most. When Dad moved to this country in 1956, he knew almost nothing of its people, its culture and its language. For him, it wasn’t an obstacle — it was a challenge to be met. In retrospect, he not only learned the American culture — he influenced it through his movies and his work.

All of you are here tonight because in one way or another you’ve been touched by Mike Medavoy. I’m here because I’ve been shaped by him. I’m here because the simple principles that have guided his life’s work have become my own, and have enabled me to — in his words — “carve my own way through life.”

Dad once wrote to me, “success can be measured in many ways, but the most important way is in being human — kind, warm and caring.” That all of you are here is a testament to just how successful his life has been — that he’s lived up to values and expectations he set for himself. What’s more, if all of us in one way or another try to aim for that standard, I think we become better people — and a better community.

I’m proud to carry my father’s legacy, and to have the opportunity to join all of you in honoring him here tonight. But I do have one question for you Dad — is this the best you can do?
Thank you.