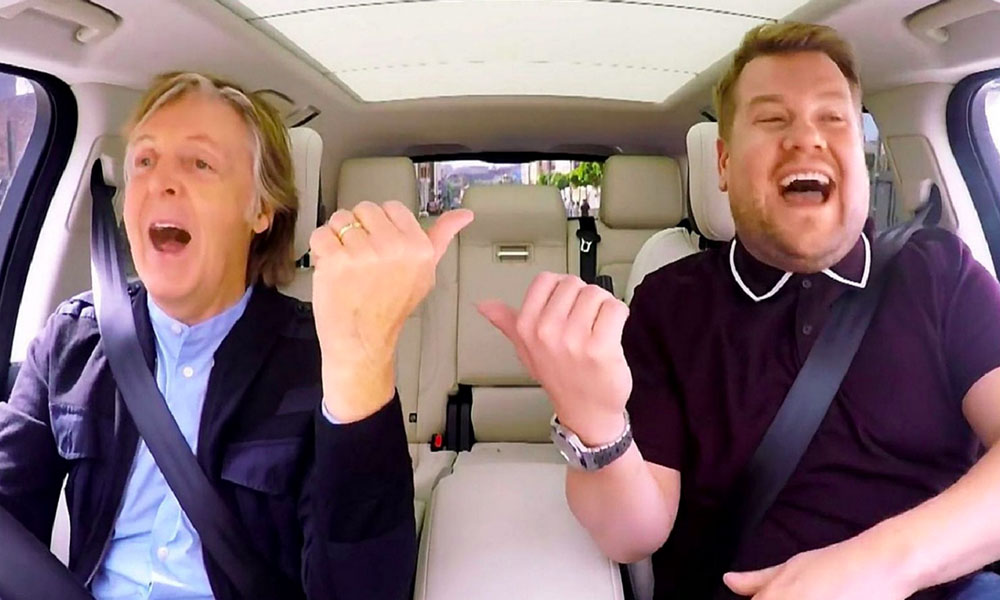 Doing so can have its drawbacks, but it’s a valuable trait as relates to my career as a Hollywood talent manager.

That’s because I don’t just passively watch shows, read books, and listen to music — I actively consider the context of what I consume.

I think about what decisions led the artist to this point, what had to go right (or wrong) for them to get where they are, and what I can learn from their journey to help my own clients.

This analysis has led me to appreciate James Corden’s Carpool Karaoke segments on a whole deeper level because they’re packed with as many lessons about what it takes to build a successful career and life as they are laughs.

Bruno Mars and the Power of Vulnerability

Everybody roots for Bruno Mars.

The guy is not only incredibly talented, but also magnanimous, humble, and deeply appreciative of the success he’s had and the people who supported him enough to get there.

He came from a musical— but embattled — family and lived in a car, on rooftops and even in an abandoned zoo as he was growing up.

Despite his gifts, nothing was ever easy.

In his Carpool Karaoke episode, he talks candidly and emotionally about his upbringing and how overwhelming it felt to get his break after years of struggle.

This led him to get caught up with the party life, be overcome by it, and fall into the grasp of drug abuse and addiction.

It’s easy to see how his True Hollywood Story could have had an unhappy ending.

But it didn’t in part because Bruno was willing to show a deeply vulnerable side to himself to others.

In this episode, he describes how much support he got from fans and the people closest to him.

This man who’s able to sing, dance, and perform like Michael Jackson has proven he’s just as able to be contrite, grateful, and unashamed of having to ask for help when he’s sunk into a valley.

This makes people want to root for him and it’s why everybody does.

His Carpool Karaoke episode is a master class in how to handle fame and success, and it demonstrates why he’s going to be on top for a long time.

Vulnerability is a superpower.

No matter how scary it is to open up like Bruno does, it will always be worth it.

You’ll be able to connect more fully with people around you and those people will root for you if you’re authentic and vulnerable.

Stevie Wonder and the Power of Humility

Stevie Wonder’s Carpool Karaoke episode starts with Stevie behind the wheel…and it just gets better from there.

In the 1980s, Stevie had the most perfect musical run that anyone will ever have with five consecutive near-perfect albums and an incredible 14 Grammy wins.

It’s completely unparalleled —and yet, he comes across as the most normal guy you’ll ever meet.

Stevie was dealt a tough hand and still swept the board. As a blind man, he became one of the greatest pianists and songwriters of all time and never let it go to his head.

The comedy bit that starts this episode exemplifies who he is and showcases his ability to be self-deprecating, to joke at his handicap, and find the joy in everything.

Like Bruno Mars, he’s humble, grateful, and so open with love you can’t help but love him right back.

That’s why we all do.

It pays to be humble.

Hard work may drive initial success, sustained success comes from staying humble and appreciating the work you put in.

And it doesn’t hurt to have a sense of humor about yourself as well.

Paul McCartney and the Power of Confidence

Paul McCartney is probably the biggest rock star on the planet.

For further proof of this, look no further than to see how starstruck James Corden is to even be in a car with him — Corden literally breaks into tears while singing with him.

Who can blame him? It’s Paul F’ing McCartney!

The Beatles were roughly as popular as the Internet.

Their fame was truly inconceivable, made all the more legendary by how tragically short-lived their performing days were.

While Stevie Wonder may have had a perfect musical run, The Beatles built the industry that made that run possible.

As a result, Paul McCartney has basically never not been famous and is the quintessential rock star and anyone would be floored in his presence.

James Corden is not a regular guy but he absolutely seems like it with McCartney.

He hangs on every word of McCartney’s stories, is blown away exploring McCartney’s childhood home and Abbey Road, and makes you feel like you’re right there with the two of them.

It all makes perfect sense because, as Bob Lefsetz wrote in The Lefsetz Letter, McCartney’s life is our lives.

Paul McCartney and The Beatles have been an important, even integral part of the lives of just about everybody, regardless of their age.

He exudes charisma and makes you want to be him, but there’s nothing fake or performed about him.

He’s as comfortable in his skin as anyone, but doesn’t make a big deal about it.

There’s nothing quite like being comfortable in your own skin.

It’s the most important thing you can do in any industry, but it works double time when you’re in the performing arts.

McCartney is so secure in who he is that by simply existing he exudes a supreme confidence. That’s how you make people believe in you.

Carpool Karaoke and the Power of Looking Closer

I’ll leave you with this:

It’s easy to see things at a surface level, but there’s so much more value to gain when you look a little closer.

My binge-watching of Carpool Karaoke episode has made me further appreciate the lives and struggles of these artists more than I had before and it’s not only made me admire them more, but also be inspired by them.

Nothing in this world is square; there are always more sides than you can count.

So spend a little time trying to see how many you can find.